High-Quality Design For An Independent Filmmaker

The producer of the independent film Rich Kids, Laura Somers, reached out to Creative Allies to get assistance in creating their official film poster. Laura has a passion for telling stories that are entertaining but also deal with social issues. As they wrapped up filming and started marketing the project, they knew a well-designed, eye-catching poster is just what they needed to represent the film well.

Independent filmmakers are responsible for all of their own marketing for their projects. For Rich Kids, a crowdsourced design campaign proved to be just what was needed to create a spectacular poster for this film. We were able to create a custom design contest that fit within the timeframe of the film’s release. Even though the budget was small for this engagement, we were able to attract very high-quality designs and choose a winning poster that the director, actors, and crew fell in love with.

Film Festivals All Over The Country

Rich Kids is based on a true story of a group of young friends from an economically challenged background who deal with disparities and ultimately tragedy.  The film boasts a young, talented majority Latino cast and is gaining recognition across the country.

The Creative Allies team was thrilled to hold this design contest. Our community had the chance to work with this amazing filmmaker, and her incredible cast. The film has been screened at over 15 film festivals around the United States. At each of these festivals, the cast and crew highlight and display the film’s official poster, designed by a Creative Allies community artist.

Here are just a few of the amazing submissions that were in the running to become of the official movie poster for Rich Kids. 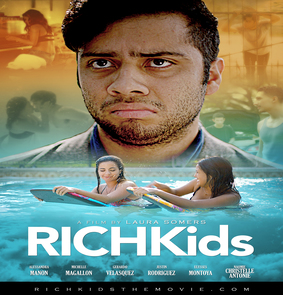